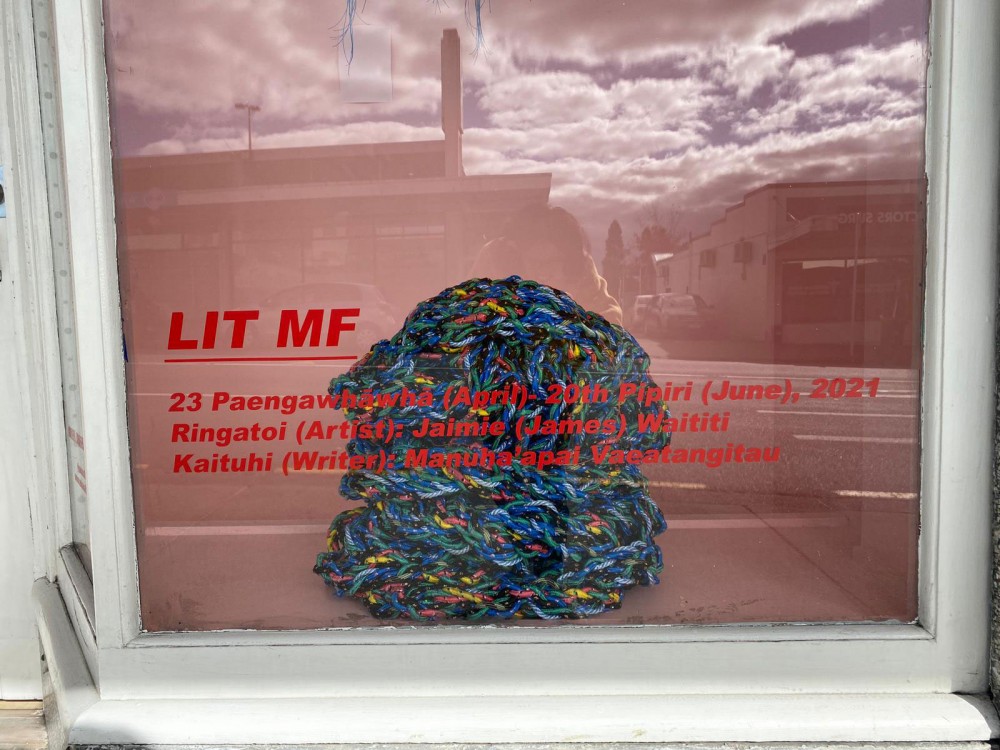 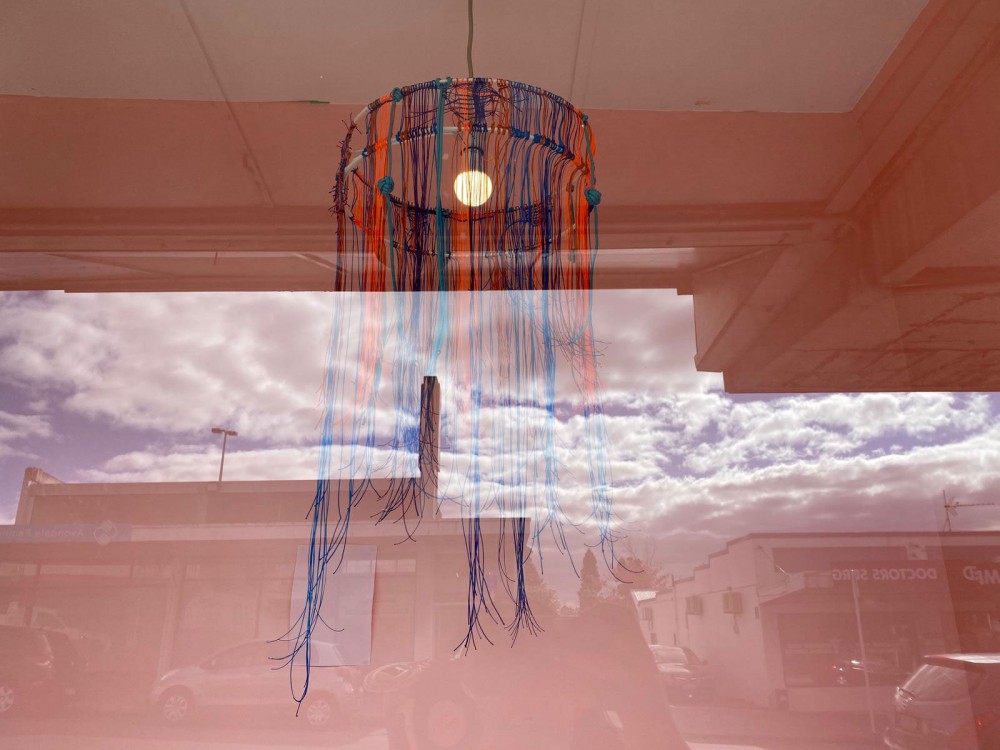 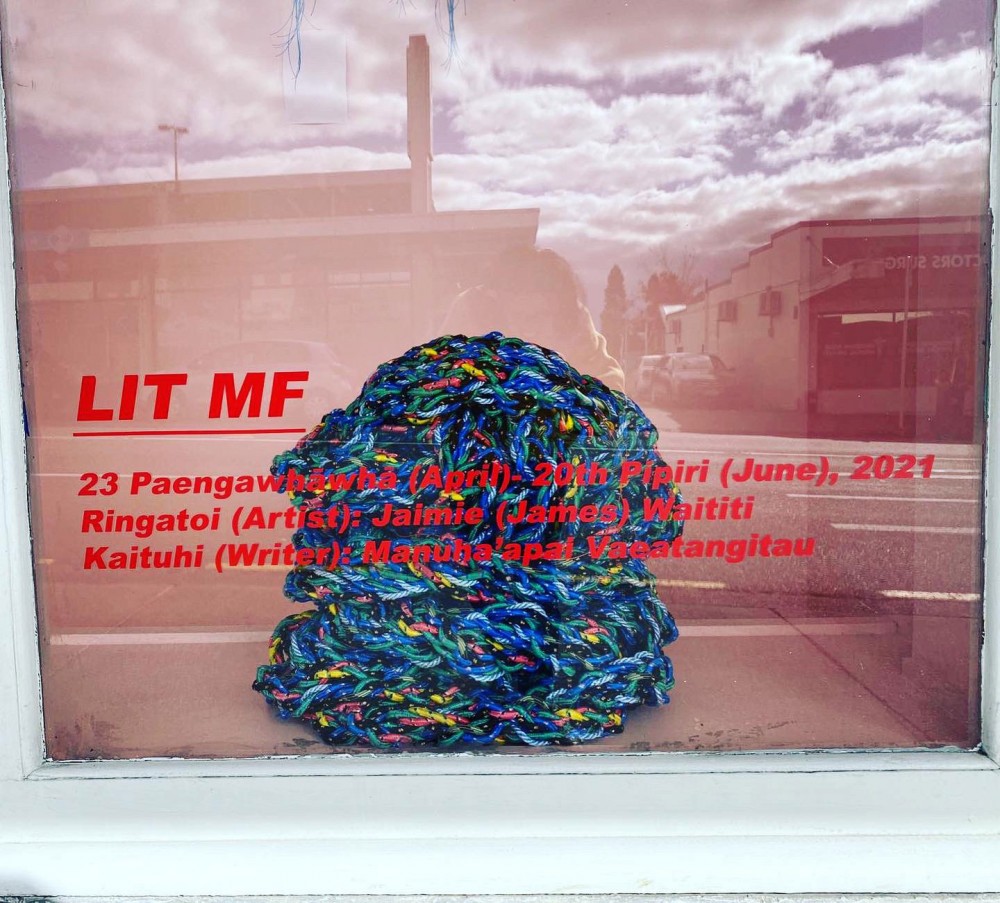 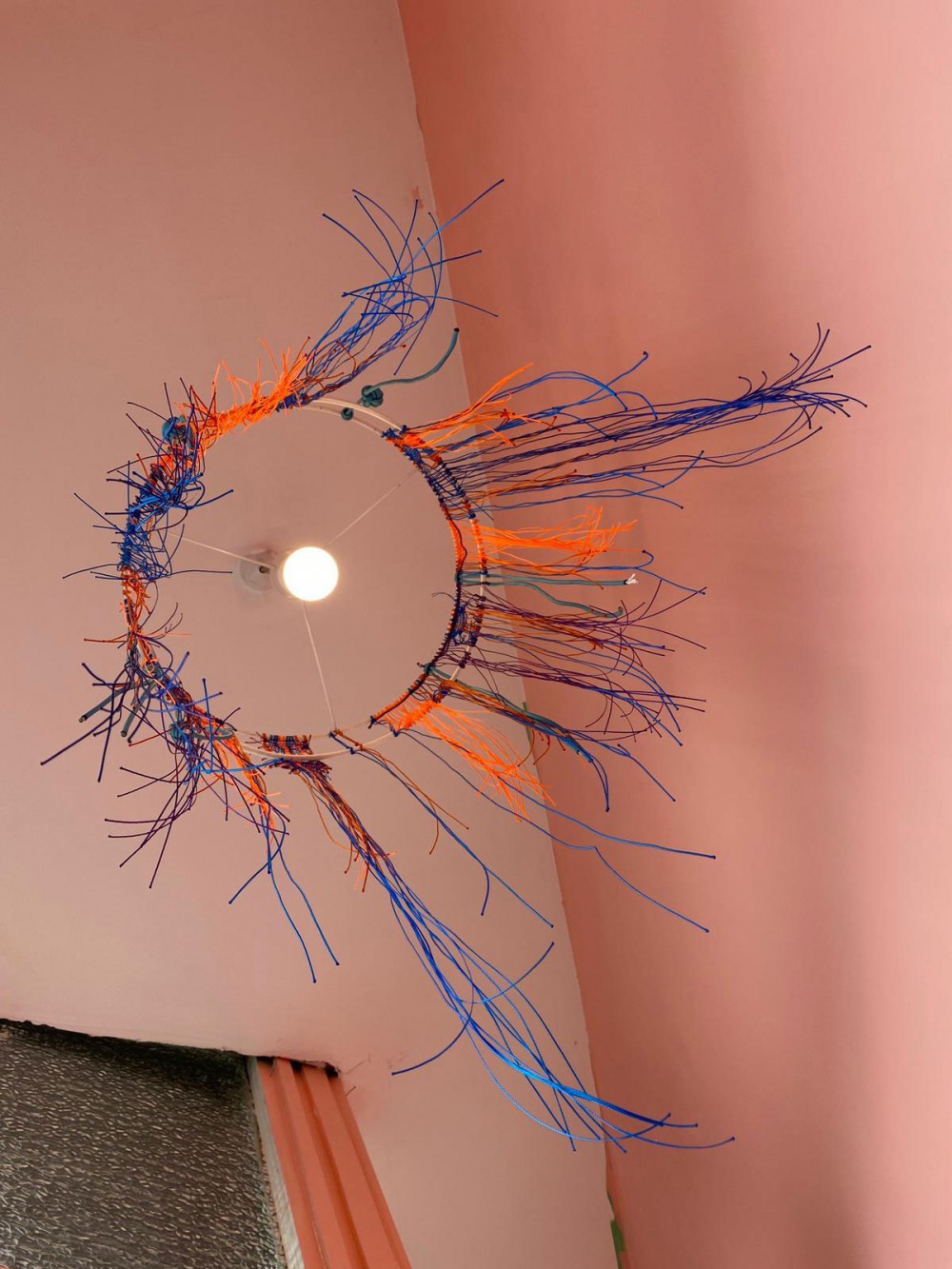 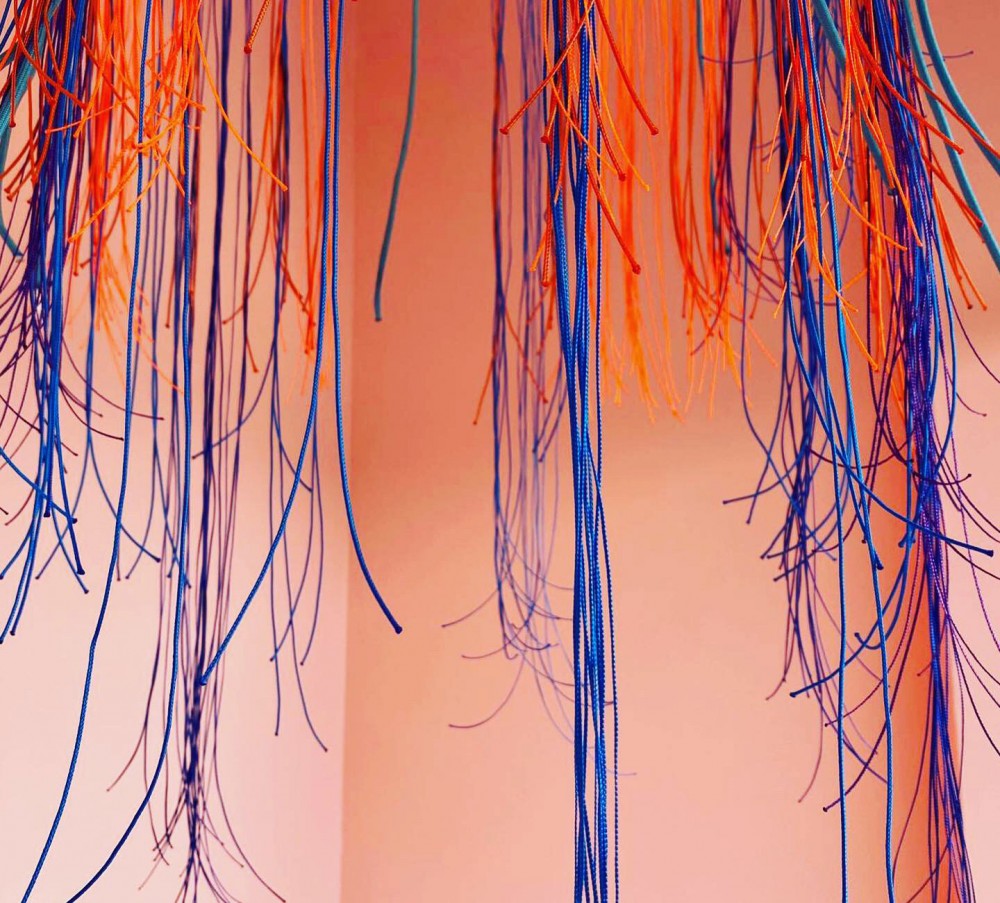 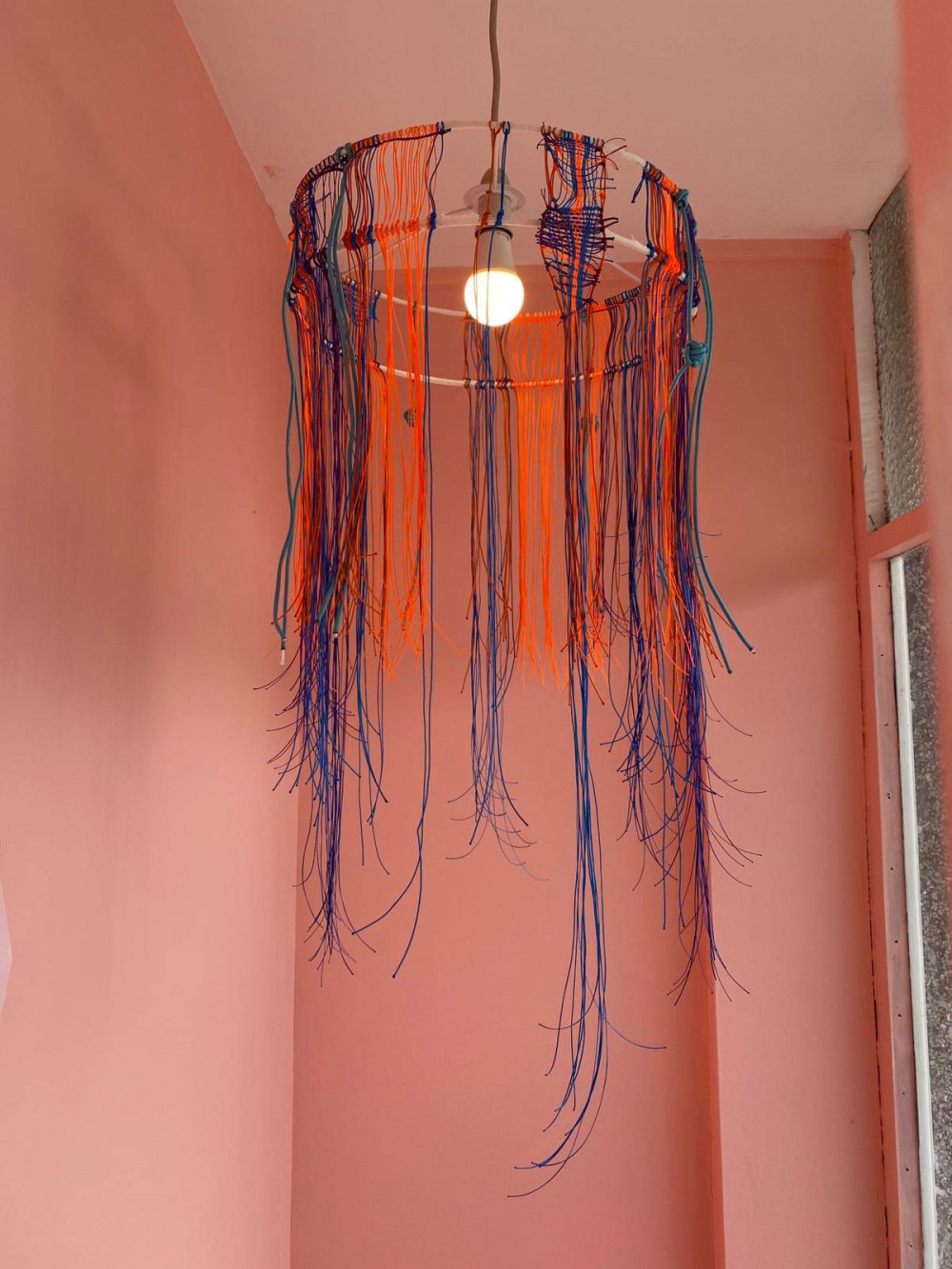 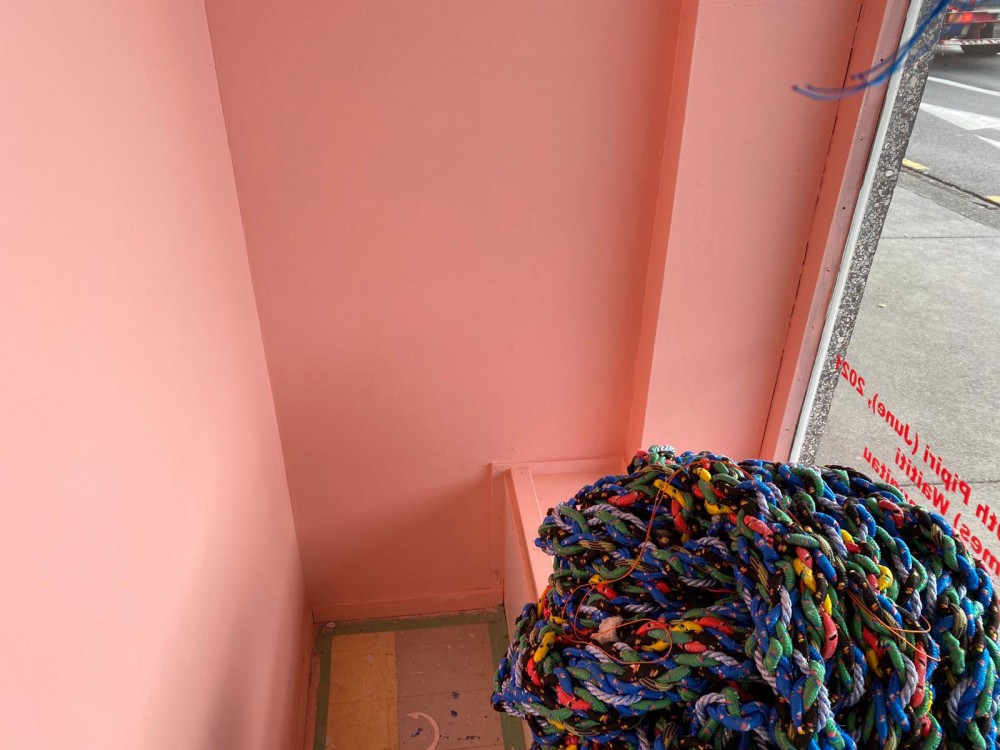 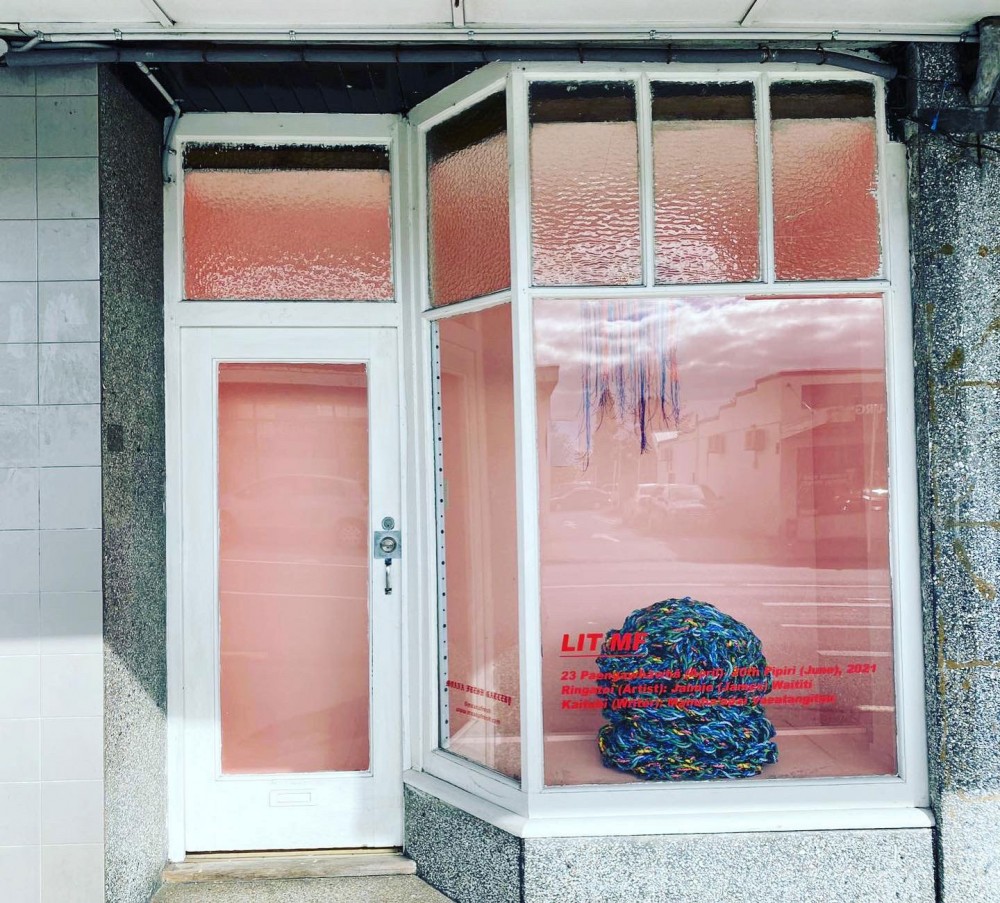 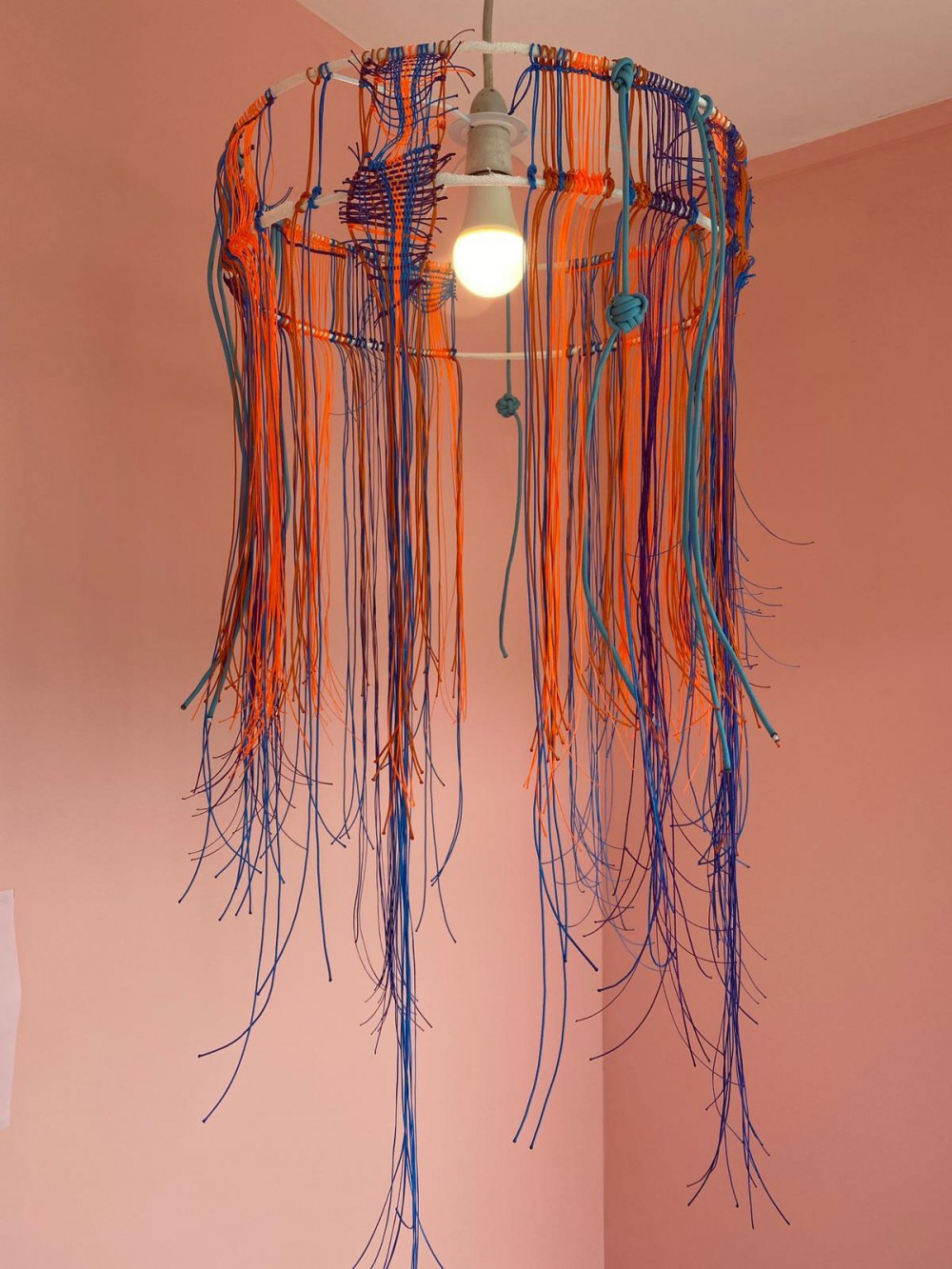 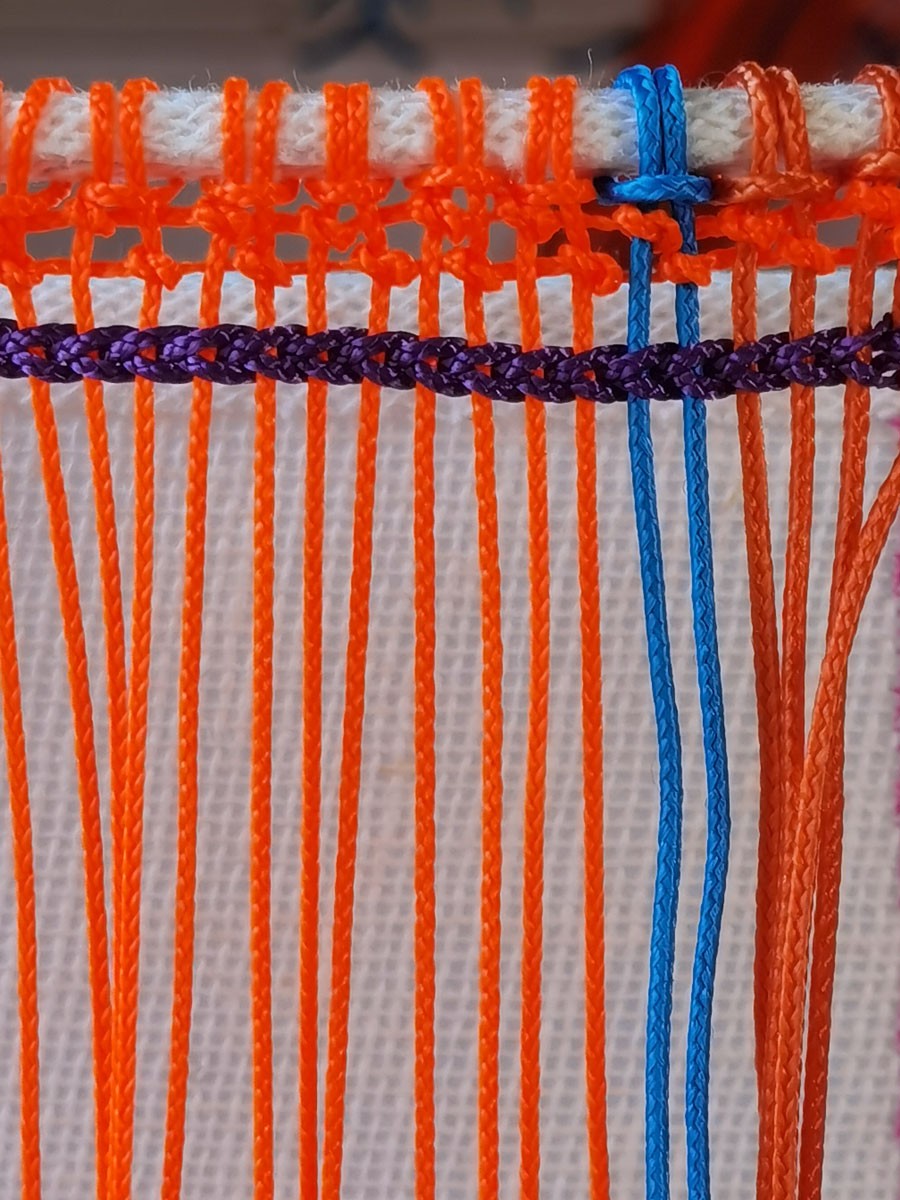 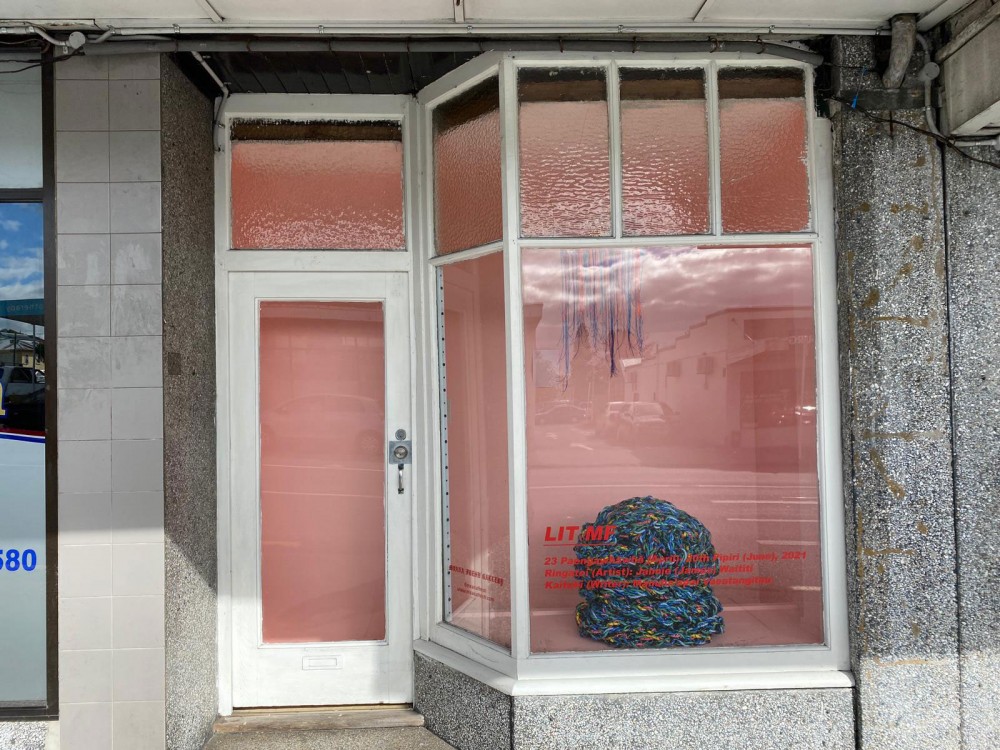 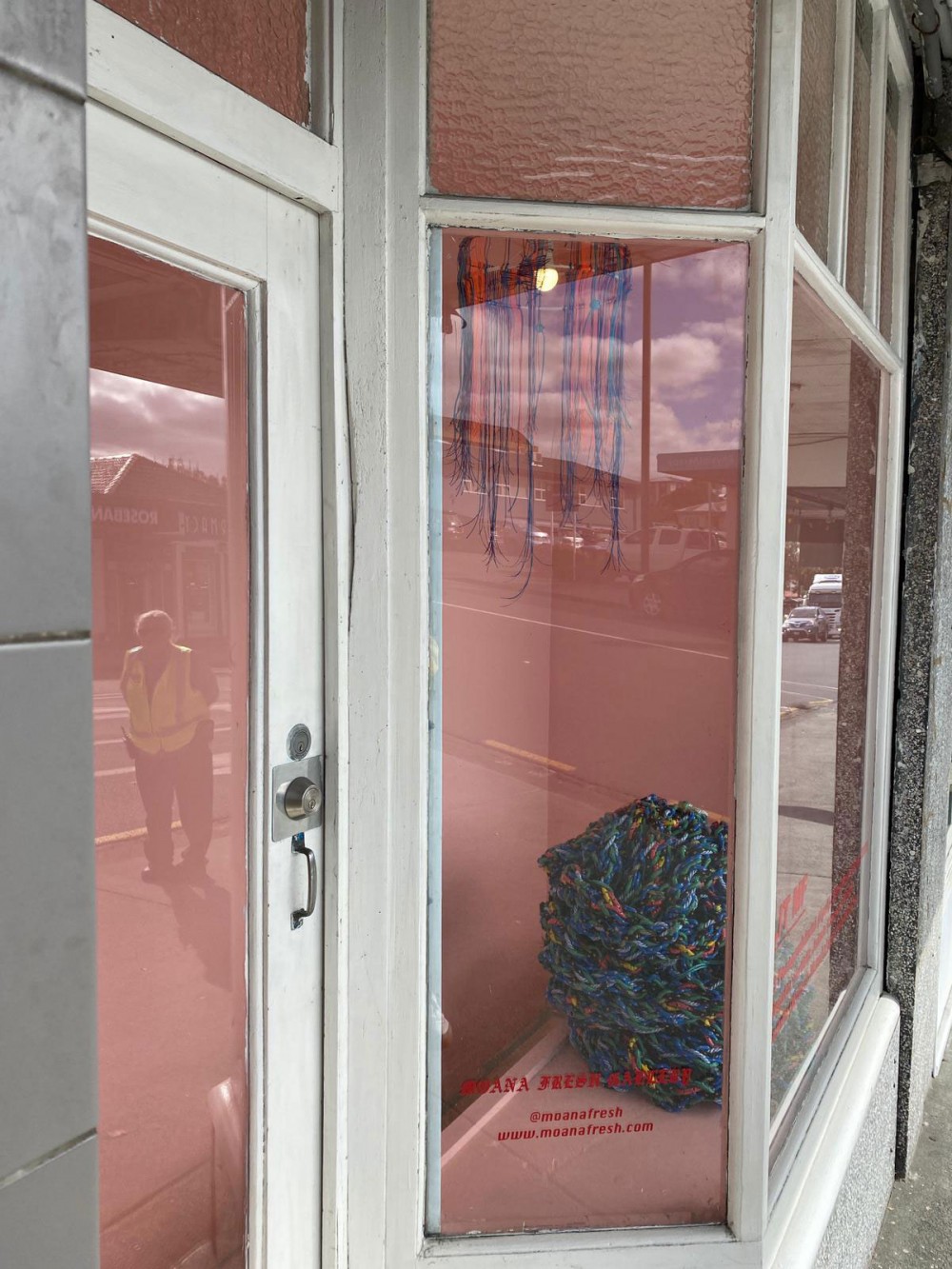 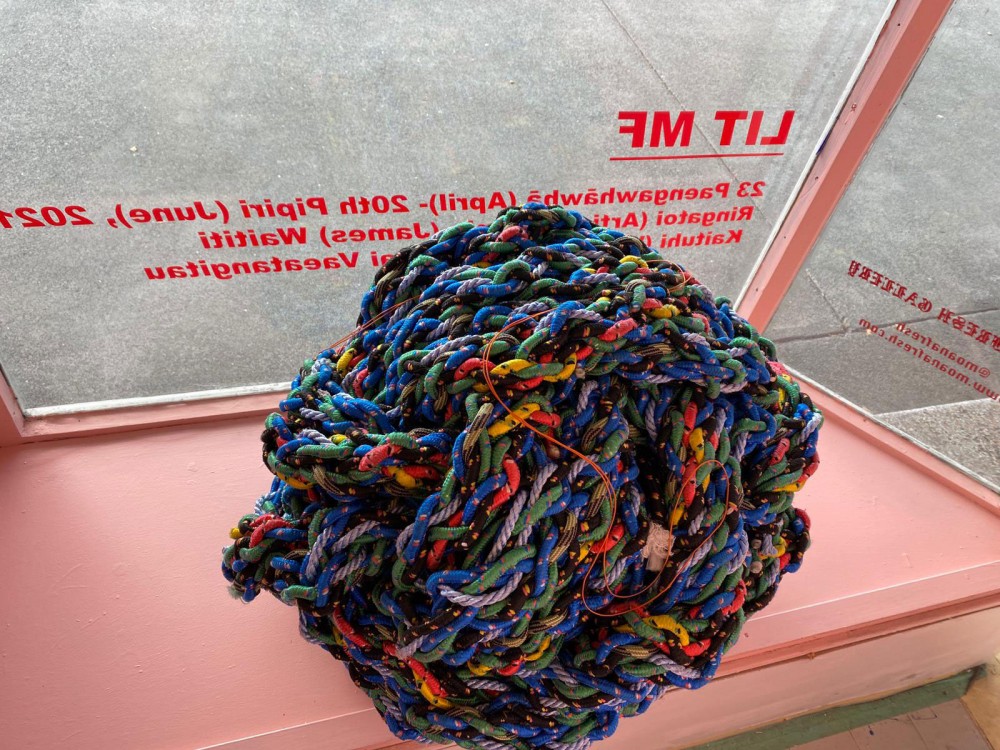 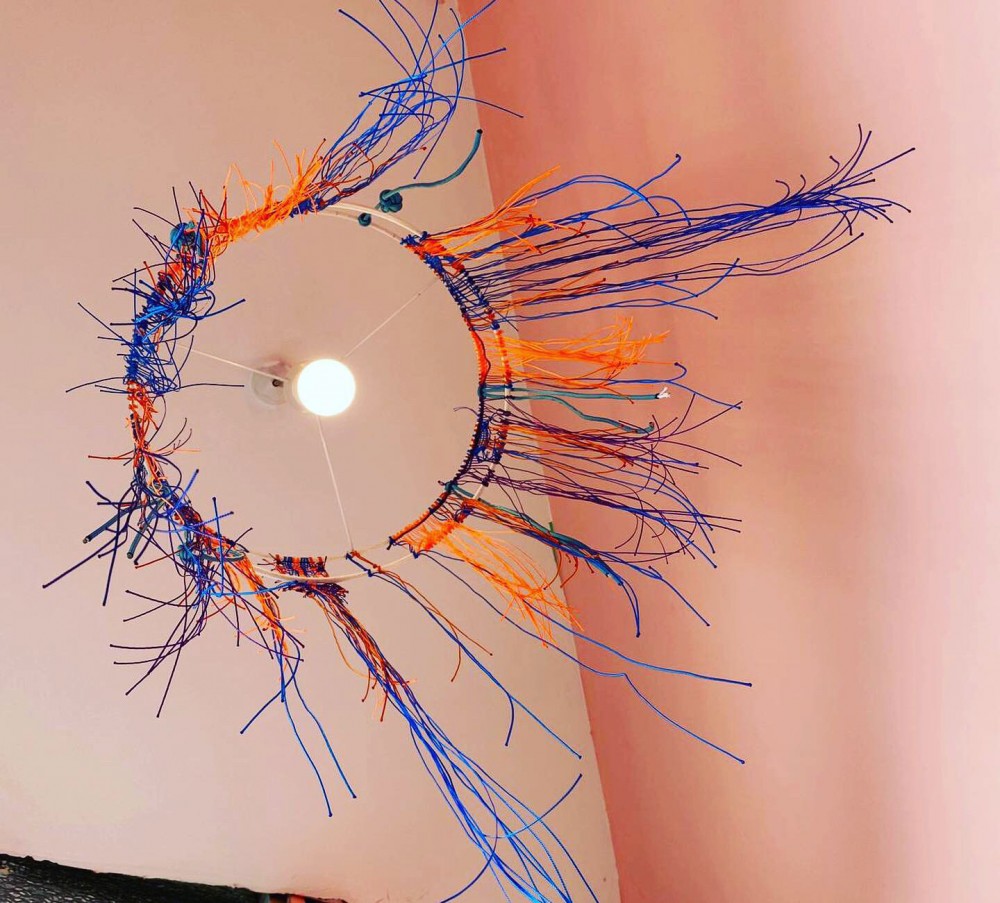 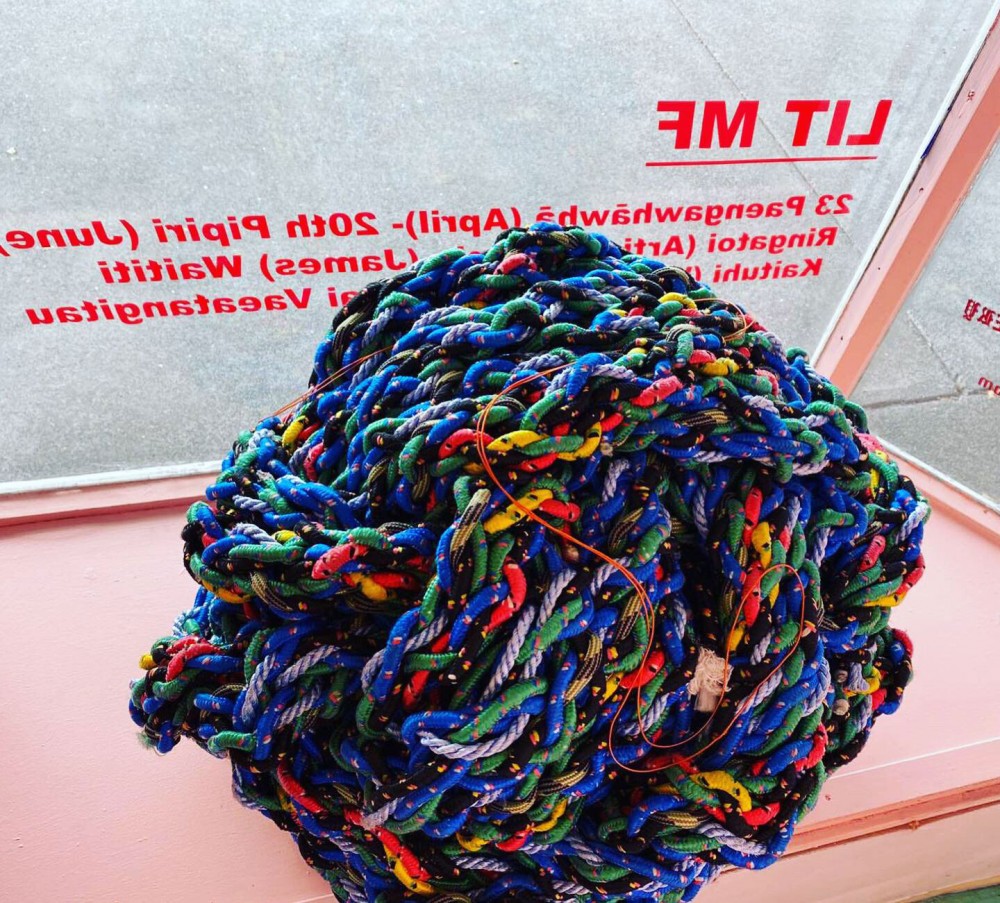 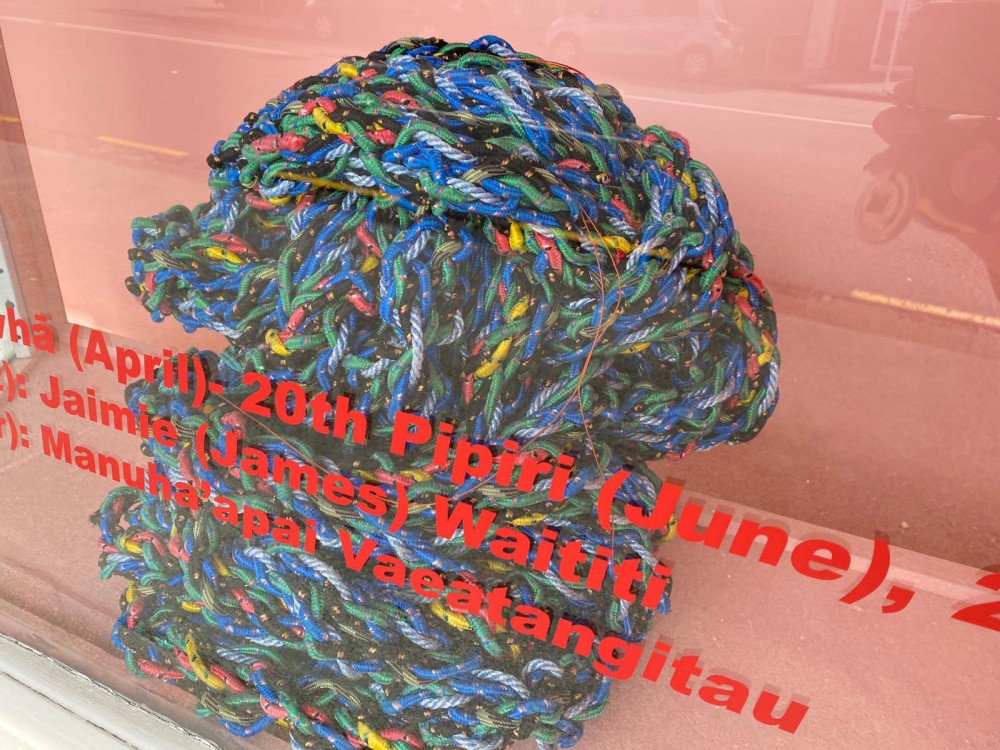 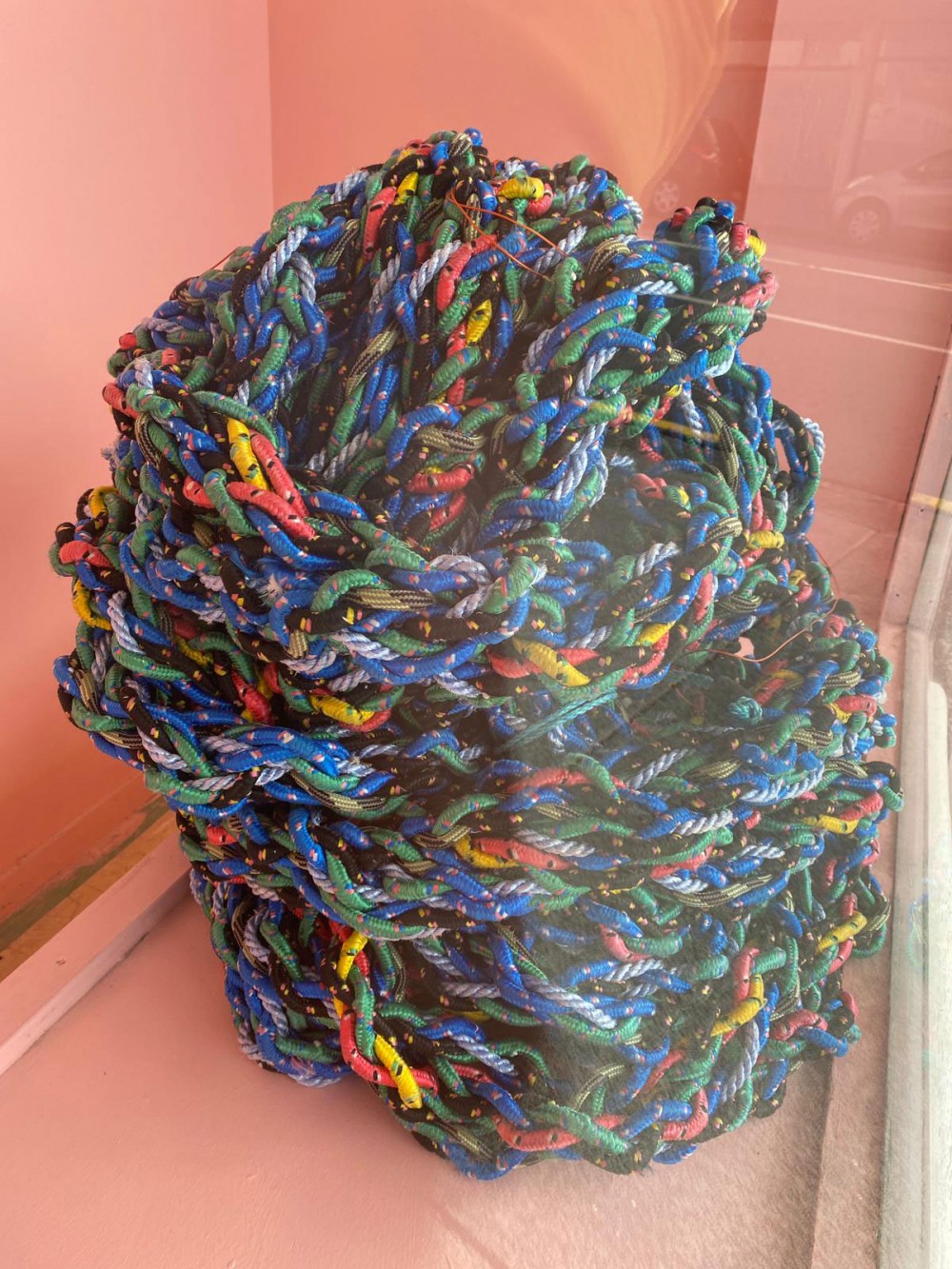 LIT MF is a new installation exhibition from artist Jaimie (James) Waititi. Jaimie is a multi media artist working across installation, performance, digital art and body adornment. Jamies rope work is well known here at Moana Fresh including the popular monkey fist necklaces, harnesses and custom rope work, worn by the bold and beautiful. For LIT MF we see further exploration and subversion of their multi layered knot-making practice in a site specific installation in the Moana Fresh Window Gallery. This exhibition is complemented with writing from Manuha’apai Vaeatangitau, an emerging interdisciplinary artist, practicing across the mediums of illustration, poetry, performance and music. 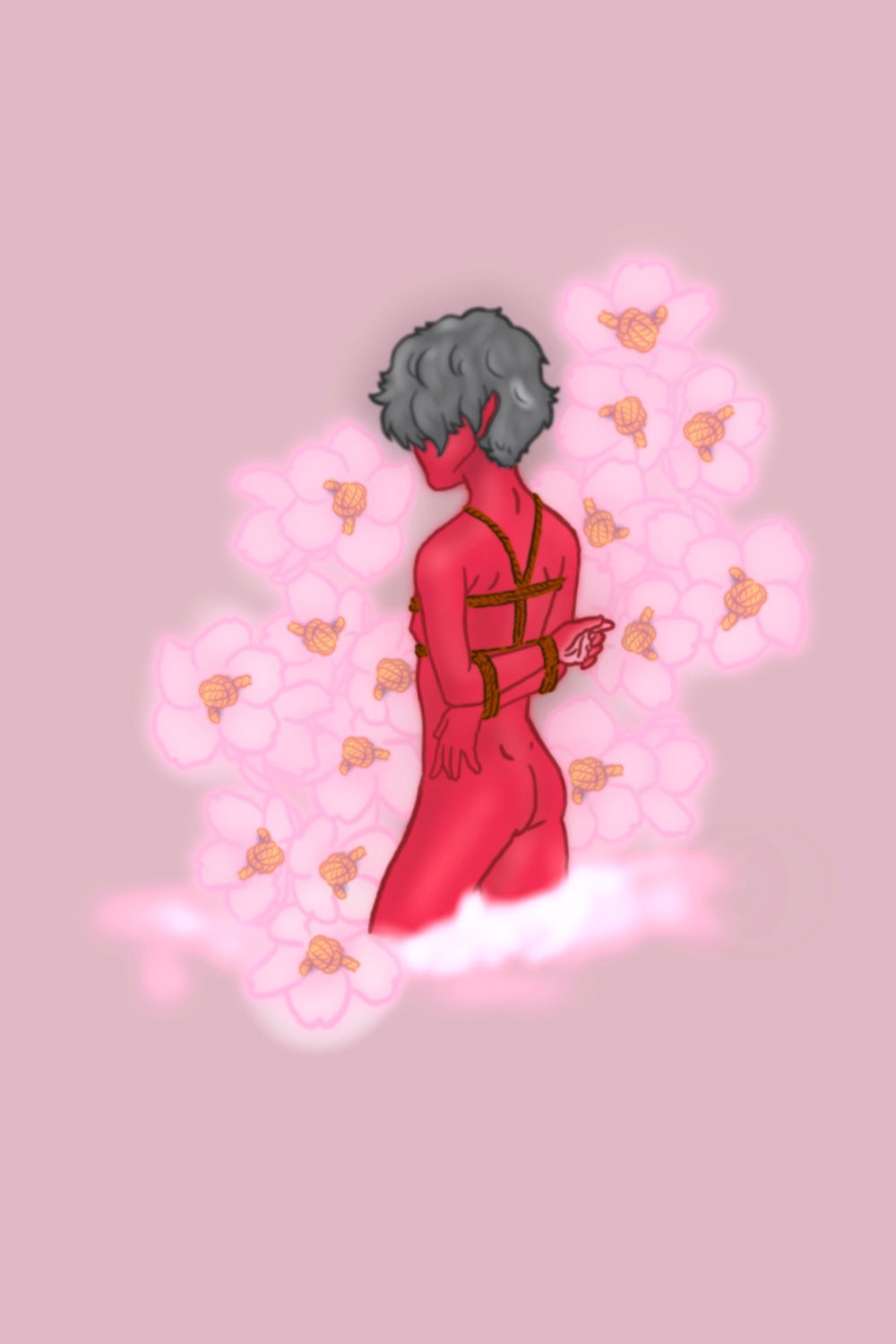 Te Here Tangata
stretches forward and back,
binding together blood and bone,
man, and god.

James Waititi’s affinity to rope and its capacity for storytelling is one entangled in the reunification of self. A fusing of cultures both contemporary and ancient, rope and its many knots exemplify this. The monkey’s fist, a knot originally used by sailors to add weight to anchors sits at the centre of James’ practice. Today, the knot can also be recognised as a weapon, otherwise known as a ‘Slungshot’ or as a gagging device in BDSM play. Its versatility, a metaphor maybe for the tracing of lineage of James’ many selves to a singularity. The process of individuation, a return to oneness.

In a conversation we had they compared the knot to the union of Ranginui and Papatūānuku. Their embrace so all-encompassing that light could not pass through, locking the world in eternal darkness. By the hands of their children, they had been forced apart allowing for life to come into being. The subsequent creation of Hine-ahu-one by the hand of Tāne Mahuta and the birth of Hine-tītama provided the first strands of Te Here Tangata, the Rope of Mankind, braiding the lifeforce of gods into man.

Now, is this all a convoluted attempt to draw arbitrary meanings? I’d like to not think so. Context is important and to deny the impact of James’ Maoritanga and their juggling of personas would be remiss of me. What would also be remiss of me is to not mention the sheer scale at which James creates, their huge monkey fist installations are beyond any bounds of functionality, though one might argue that having a 3-foot monkey fist knot would indeed be handy on board a ship. The context of James’ culture and contending selves is compounded by, for a lack a better word, fun. Their use of rope is colourful and vivacious, from their bright monkey fist harnesses and necklaces right down to their giant rope installations evocative of a vagina. Who ever said that the reunification of ones incongruencies had to be a drag? It is a messy process, definitely, however, to deny oneself a simple pleasure in light of such a dreary undertaking is painful.
James Waititi’s work is delightful in this aspect. The world they’ve meticulously crafted over the course of their practice feels full, as any other artists’ worlds should. From god to man to man to rope and all the frivolities in between, James details into knots a story of union, separation, creation and life.